My apologies for no posts. I’ve been busy doing walking tours, driving the Butte Chamber trolley, and working on a booklet and exhibit for artifacts from the 2007 Butte Chinatown archaeological dig. The dig unearthed pieces of opium pipes, some of which are earthenware and some are stoneware. Today’s post focuses on differences in those two types of ceramic. 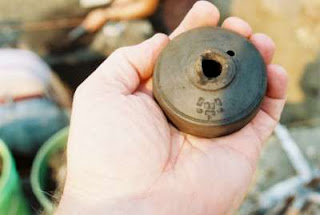 Both earthenware and stoneware are essentially fired clay, though proportions of components vary widely. Stoneware is usually fired at higher temperatures (up to 1300º C vs. temperatures more in the range of 1000º C for earthenware), which gives it a denser, more vitreous texture.

At the heart of such ceramics are clays—fine-grained sheet silicates similar to mica. Their structures can incorporate water, and when fired, such clays effectively collapse into denser structures, or even metamorphose (change form) into other, denser minerals. Ball clay, so named because historically 35-pound cubes of clay became rounded during shipping, is a common constituent. It is usually mixed with varying amounts of kaolin (another clay mineral), quartz, and feldspar to make ceramics.

In the United States, Pennsylvania was a historical major producer of ball clays. In Europe, Devonshire, England was an important source. Today, 63% of U.S. ball clay production comes from Tennessee.

Ceramic earthenware and stoneware such as dishes and bowls is a tiny volume of all clay consumed. Most ball clay in the U.S. serves as fillers and plasticizers in floor and wall tiles, and in the ceramics that become toilets and sinks.

The clay industry in the United States is a $1.4-billion business employing about 5400 workers in 41 states.

Photo of opium pipe from Butte Chinatown archaeological dig courtesy of Mitzi Rossillon.
Posted by Richard Gibson at 8:44 AM 2 comments: