Last night I went to a Butte history talk focusing on home furnishings about 1910. Among the multitude of state-of-the-art items anyone could buy at Butte’s Hennessey’s store using the newly invented time payment plan (a.k.a. credit) was linoleum flooring.

Invented in England in the late 1850s, linoleum's basis was solidified linseed oil derived from flax plants. It gave a tough but flexible material. Minerals extend and improve the properties: finely ground limestone or whiting may comprise a third of linoleum’s volume while clays add flexibility and also serve as extenders or fillers.  Various other additives—sawdust, gum, pine rosin—also help give linoleum its desirable properties. 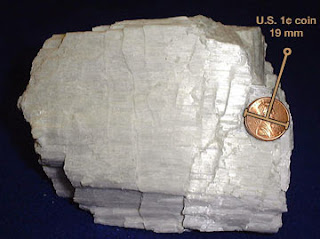 Although wollastonite deposits were exploited in Inyo, Kern, and Riverside Counties, California, from 1930 to 1970, the largest wollastonite mines in the U.S. are in Essex County, New York, in billion-year-old rocks of the Adirondack Mountains. The ore is processed at Willsboro, and together with another mine in Lewis County makes wollastonite New York’s fifth most valuable non-fuel mineral product. Almost all U.S. wollastonite production today comes from New York, adding up to about a quarter of all produced in the world. That ranks the U.S. at #3 for wollastonite, following China and India which together account for about 70% of world production.

Thanks to the New York mines, the U.S. is largely self-sufficient in wollastonite production, with something like 5% of consumption imported. India is the leading source of those imports, but China, Canada, Germany, Finland, Japan, and France also ship small volumes to the U.S.

Much “linoleum” today is really polyvinyl chloride, made from natural gas and salt. Although Frederick Walton patented his linoleum-making process in 1860, he failed to trademark the name and lost lawsuits alleging others who used the word infringed on his trademark. Consequently, “linoleum” is considered the first product name to evolve into a generic term—and it happened just 14 years after its introduction.

Wollastonite specimen image from U.S. Geological Survey via Wikipedia.
Posted by Richard Gibson at 10:16 AM

Nice. I like the fact that "real" linoleum was a more or less natural product. In our renovation work, we're trying to avoid pvc and other plastics to the extend practicable (is that a word?).